FromSoftware has announced that the DLC for Dark Souls III is set for release on PC, Xbox One and Playstation 4 on March 28. During the wait however, a video has leaked showcasing the first boss of the DLC.  The video has since been removed, but it can still be found on some sites.

According to the Dark Souls wiki for the DLC “At the close of the Age of Fire, as the world ends and all lands converge upon themselves, a lone adventurer descends into the madness of the earth and uncovers the secrets of the past. As players make their way to the fabled Ringed City they will encounter ancient beasts, a new cast of characters teetering on the edge of insanity, new armor, weapons, magic, and at the bottom of it all, a long-lost city filled with new horrors for players to overcome.”

The leaked video shows a new boss fight in an unnamed location, though it bears many similarities to the Kiln Of The First Flame. The boss fight shown in the video begins as most standard boss fights do; large monster appears, health bar at the bottom and name at the bottom (Crimson Bat, for those curious)  and 3, 2,1 go!

Things quickly change when, after the Crimson Bat has taken some damage a second large adversary appears with it’s own health bar. While this is similar to the Undead Legion boss fight the new enemy, named The Demon From Below, is not hostile towards the original monster. This means the character is  now in a 2v1 face off with 2 large enemies.

The opponents seem to inflict toxic damage with The Crimson Bat using heavy melee attacks and The Demon From Below favoring ranged attacks, though this could be because of how the character’s player was choosing to engage. Both have the appearance of large deformed bats, but have the same flame accents used by the demons in the Smoldering Lake. While they do have wings, they did  not appear to fly.

The character in the video wears standard knight gear and a kite shield. They did not attack The Demon From Below and instead opted to kill the Crimson Bat first. Once the original boss fell, the Demon From Below exploded in a burst of flames and became “Demon Prince”,  again with it’s own boss health bar. This creature used flame attacks similar to the Old Demon King in the Smoldering Lake, but did not have any weapon in hand like some of the other demons players faced in the main game. 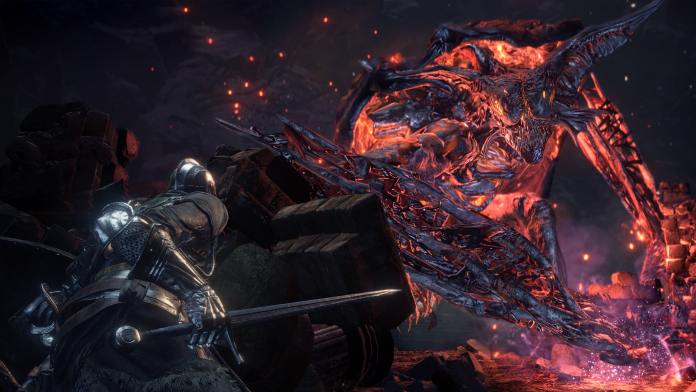 Ultimately the player character died and the video ended, leaving us with questions and anticipation for the newest Dark Souls III DLC. The Ringed City, which is available for download March 28, is the second DLC for the game, and follow-up to Ashes of Ariandel which came out last October. Additionally, a Special Edition of the game, Dark Souls III: The Fire Fades, will be released  April 20. It will contain both Ashes of Ariandel and The Ringed City.