Home Movies Everything We Know About ‘Alien: Covenant’

The annual South By Southwest film festival in Austin, Texas, provides new and exciting movie news every year. And this year, some of the biggest headlines we’ve seen coming out of the festival early on are about Ridley Scott’s Alien: Covenant. We’ve combed through the headlines so you don’t have to, and put together all the biggest stories.

There Will Be More Movies

We’ve always known that Ridley Scott wants to milk the Alien franchise for all it’s worth. After all, it’s his brainchild. Out of every great film he’s made, the Alien series is the only things he’s identified with that still has any life. But, as he told reporters at SXSW this week, that wasn’t always the case. 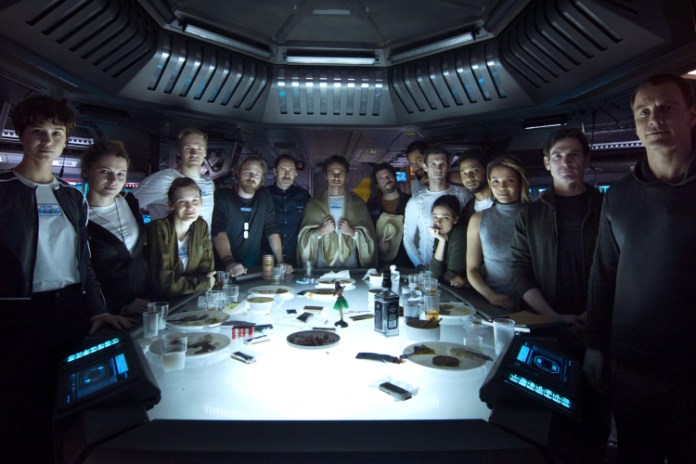 According to a report from Entertainment Weekly, Scott feels that “Alien vs. Predator really f—ing nailed it into the ground”. He continued on saying

“I thought about that for awhile, and I said, ‘I can bring this back.’ And here’s the cause and effect: We resurrected it with Prometheus, which had two really good questions that the others weren’t asking: Who made [the aliens] and why? Prometheus set that up. [Covenant] answers ‘who and why.’ Then it leaves all kinds of questions for the next two, or three, or four. Covenant 2 is already being written as I speak right now.”

We’ve had conflicting reports about Alien: Covenant for years now. Scott was telling reporters about the movie back when it was still called Alien: Paradise Lost. Even before that, when it was Prometheus 2 he told reporters that it had nothing to do with the Alien franchise. Then we found out that the movie would tie into the Alien universe. Scott confirmed, saying that the film would offer up a connection to Ripley’s story.
With so many different ideas kicking around in his head, we’re glad to hear that the movie. But with any franchise, there’s always a risk that more movies will lead to audience fatigue. Here Scott told EW that there’s no reason to worry. He told them to “watch this space” for news on how the franchise will be revitalized shortly.

So what about that Ripley connection he was talking about a few years ago? Fans have theorized that Katherine Waterson’s character, Daniels, is likely related to Ripley somehow. But Scott seemed to squash that rumor at SXSW saying “No. That was probably way back when. ‘Should she be the daughter of Ripley?’ I said ‘no.’ She’s herself.”

The interesting twist there is that nobody suspected Daniels to be Ripley’s daughter. As far as we know, Alien: Covenant is a prequel to the entire Alien franchise, taking place between Prometheus and the first Alien movie. So, if anything, fans were expecting Ripley to be Daniels’ daughter. Not the other way around.

It is possible that Scott just misspoke. But in his attempt to set the record straight, Scott has only piled onto the fire. Theorists across the internet are taking the quote and running with it, assuming that Daniels is not ‘the daughter of Ripley’ but the mother of Ripley.

For anyone who’s interested, Alien: Isolation was a fantastic game for Xbox One, PS4, and PC in which the character did, in fact, play as the daughter of Ripley. So if you’re wondering where that story goes, I’d highly recommend you check it out.

And what about Michael Fassbender? He played David, the cyborg in Promethius. Fassbender is back in Covenant many expected he would be playing the same character. But Fox has released a fictional  promo for a new model of cyborg, and it puts a twist on people’s expectations for Fassbender in Covenant.

The name change works from a story-telling point of view. If Fassbender was playing another David model of cyborg, it would be hard for audiences to remember that he wasn’t playing the same David that we saw in Promethius. Giving him a different name will help to keep those two characters seperate.

However, there may also be in fiction reasons for why the two characters have different names. The Walter model of cyborg may have different features than the David model did. On meetwalter.com, the website advertised at the end of the promo, visiters can learn about all the fantastic features the new Walter model has available.

There we find out that customers can “Let him observe, analyse, and predict so you can avoid trouble before it starts”. We also learn that Walter has “no emotional needs, but he’s been engineered to percieve a full spectrum of feelings”. While we’re aboslutely sure that Walter won’t help the crew of the Covenant avoid trouble, the most upsetting part of his description is that Watler runs on “automatic updates” and is a “hassle-free” companion. If Walter doesn’t get an automatic update pushed through that causes him to turn on the crew so Earth scientists can learn about the Xenomorph, I’ll eat my space helmet.

So that’s everything we know about Alien: Covenant. Please sound off in the comments and let us know what we missed. Later this week we’ll be Alien: Covenant trailer, so be sure to follow us on twitter @NerdItHereFirst so you know when that happens.

Audience vs. Predator | ‘The Predator’ Review